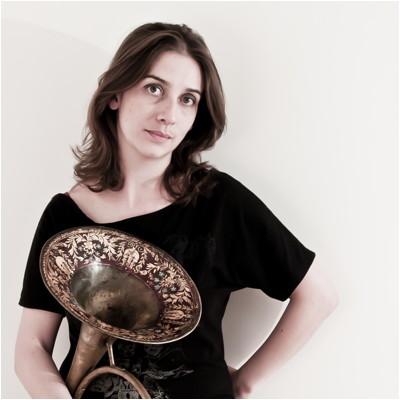 Anneke Scott began her studies at The Royal Academy of Music, London with Pip Eastop and Andrew Clark. She was subsequently awarded prestigious scholarships to further her studies in France (with Claude Maury) and Holland (with Teunis van der Zwart), where she concentrated on period horn playing.

Since finishing her studies she has been in great demand with ensembles in the UK and continental Europe. She is principal horn of Sir John Eliot Gardiner’s Orchestre Révolutionnaire et Romantique and The English Baroque Soloists, as well as The Orchestra of the Sixteen (dir. Harry Christophers), Europa Galante (dir. Fabio Biondi), Irish Baroque Orchestra (dir. Monica Huggett), Dunedin Consort and Players (dir. John Butt) and The Avison Ensemble (dir. Pavlo Besznosiuk). She has also frequently guested as principal horn with the Australian Chamber Orchestra (dir. Richard Tognietti).

For many years she has had a keen interest in chamber music which led to her becoming a founder member of The Etesian Ensemble. Through this ensemble she met the fortepianist Kathryn Cok with whom she formed a duo specialising in Classical and Romantic repertoire for horn and fortepiano. Their debut disc of virtuosic music for natural horn and fortepiano from early-nineteenth century Vienna was released in June 2011 by Challenge Classics. She is also a founder member of ensembleF2 with whom she performed the Mozart Horn Quintet at London’s Wigmore Hall in April 2009.

Anneke’s activities are not confined to period performance. She has performed the music of Ligeti with the London Sinfonietta, and can be heard on two albums with the Nigel Waddington Big Band. Future plans also include a recording of …une autre voix qui chante… a new composition for solo natural horn by John Croft.

In 2007 Anneke was elected an Associate of the Royal Academy of Music, an honour awarded to past students of the Academy who have distinguished themselves in the music profession and made a significant contribution to their field, and in 2010 she was awarded a Gerald Finzi Scholarship to undertake research in Paris into the works of Jacques-François Gallay.