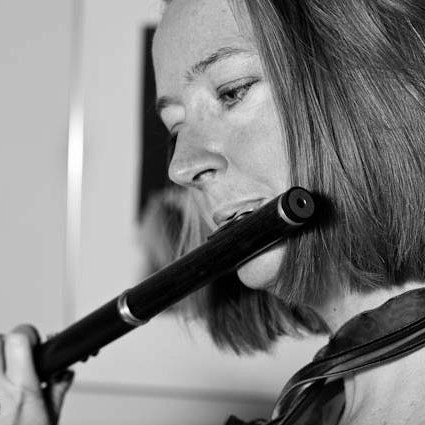 Elizabeth studied at the Royal College of Music as a Junior Exhibitioner (where she was awarded the Sally Wainwright woodwind prize in 1985) and as a graduate at the Guildhall School of Music and Drama, studying renaissance flute with Nancy Hadden, baroque and eight – keyed classical flute with Stephen Preston and modern flute with Kathryn Lukas. She went on to do a postgraduate study of Early Music at the Koninklijk Conservatorium in The Hague, studying with Wilbert Hazelzet and receiving masterclasses from Barthold Kuijken. During this time as a student, she was involved in a number of recordings for the New London Consort under the Decca label (recorded using my maiden name – Elizabeth Stanbridge) including; Susato Danserye 1551, The Sylvan and Oceanic Delights of Posilipo, Monteverdi Vespers 1610, Locke Psyche, Blow Venus and Adonis and Telemann Water Music.

Elizabeth currently teaches flute and recorder at Wells Cathedral School and at the City of London School for Girls in London and is a regular examiner at graduate and postgraduate level at the music colleges in Great Britain.

In 2008, Elizabeth recorded a solo CD of Telemann’s Fantasias on a modern wooden flute, followed in 2011 with a recording of the J.S.Bach Flute Sonatas with her group ‘Continuum’. To promote these recordings, she has appeared live at the British Flute Society Convention and performed in Festivals throughout England. In 2012, Elizabeth formed a partnership with the pianist Richard Shaw, exploring repertoire from the mid nineteenth century composed specifically for her original Louis Lot Boehm-system flute, dated 1859. They have recorded a promotional video with ‘First Creative’ using Chopin’s original Ignace Pleyel piano from 1848, currently housed at Hatchlands as part of the Cobbe Collection, and given a solo lecture recital as part of the 2012 British Flute Society convention. Elizabeth and Richard were guests on the live arts programme ‘In Tune’ for BBC Radio 3 and plan to continue to bring this rare flute to audiences in France, Holland and America.

Elizabeth lives in London and Somerset with her husband and two children.